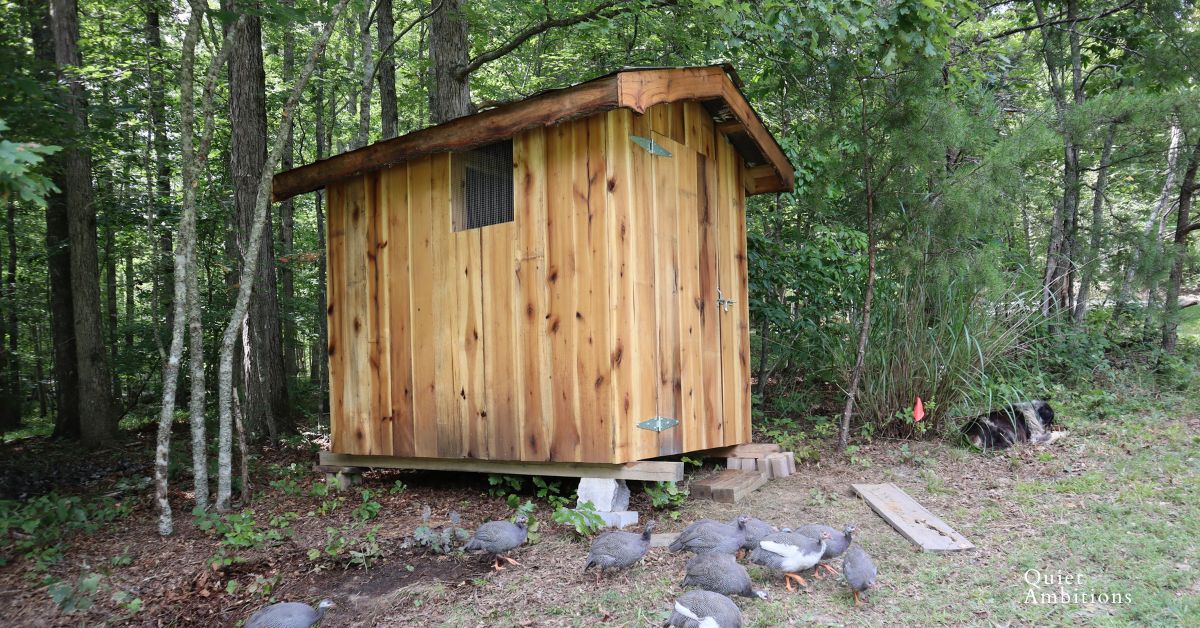 Guinea Fowl Coop Ideas. A DIY design for both the fowl and the owner. My flock of guineas love their new guinea fowl coop. We included ideas to make the guineas happy and me happy. Did you know that a group of Guineas is called a ‘chaos”? haha, it fits. Guineas are such characters!

We built this coop for our guinea fowl. But the reality is it would work for pretty much any poultry. Chickens, ducks, turkey, it doesn’t really matter. It is a simple poultry coop.

Tim built this with lumber that he cut down from the trees in our woods. We have a sawmill and this is the first of the lumber created! It is slightly imperfect because he is still learning but… perfect for a coop! My guy can build anything.

First he built the plywood floor (that’ll be covered later) and framed in the walls. We planned for windows on either side of the coop for ventilation. Straps and clamps held it all together as he fit everything and screwed it all together.

He formed trusses by doing a little geometry, then cutting notches out of the rafters. This then fit down over the top of the walls. He left a healthy overhang for weather protection. (It rains a lot here in East TN!)

Our routine around here is a rustic look. Leaving a live edge on that board will give the coop a nice look once it is all put together.

After the frame is all together it was just a matter of adding the boards for the walls and building the door. We got some heavy duty hinges and hardware from Rural King as that door is pretty heavy duty too!

We added linoleum inside the coop for easy clean up and protecting the plywood flooring. Tim also had the idea to divide the coop in half. This way I can shut the guineas in the back half and keep my grains in the front half. I could even eventually use this coop for both guineas and chickens if I added an access door to the back half. Chicken sized access is all that would be needed. I know many people keep guineas and chickens together, but my guineas would pick on the hens so that divider would keep everyone separate and safe but make chores and putting poultry to bed at night easier.

The door hardware was a new purchase. For the interior door, Tim recycled some window hardware from the free windows we got for my greenhouse.

Guineas like to roots up as high as they can so we put the roosts up in the peak of the coop. We just used branches and it works fine and that is where the birds love to go.

Ventilation is important in a coop. For ours we’ve got the two windows on opposite sides for cross air flow and the wall and roof have a few inches of space where air can get through. If I needed to I’ll add some wire to cover that gap. So far I have not done that and had no issues. But it is something I probably should take care of.

Moving the coop into place.

Tim built this coop in our yard near his shop. We actually wanted the thing over on the edge of the woods. So… we moved it. Tim simply picked it up with our excavator and put it in place. Then we leveled it up and it’s ready for the birds. I also added a wood protector to the outside of the coop. I did a video showing how we did all this on our Youtube Channel.

DIY Guinea Fowl Coop project. I think this little building will be around a long time and probably end up used for more than just the guineas.

Do guinea fowl need a coop?

So I probably need to answer the question. Do guinea fowl even need a coop? Won’t they just roost in the trees?

That will depend on your area and predators. For us our guineas free range during the day and they are penned at night for safety. There is a risk during the day time. And yes, we have lost some guineas. At least one we are sure to a coyote.

We could simply pen them up during the day too, but that pretty much cancels out the benefits of having guinea fowl. Bug control.

The reason for having guineas is bug control. And they are fantastic at it! We noticed much less bug issues this year vs last year when we first got to this property. We also have chickens so I’m sure they have helped too.

If we simply locked them up for safety all day every day… there would be no reason to have guinea fowl.

They are getting smarter. At least I hope so. Guineas are not known for being super smart. But as the older ones get wise to the predators in our area, any younger guineas we get in future years will be taught by the elders. At least that is the theory.

So yes, there is that daytime risk. You’ll have to decide how much risk you are willing to take.

How do you get guineas to go in the coop?

Most of our guineas would actually prefer to roost high up in the trees. So since they’d just as soon be up in the trees, we simply toss some cracked corn into the coop every evening. They all run in for the treat and we lock them up.

On the few nights that we don’t do this, some still go in the coop but many end up in the trees behind the coop. And then there are the 5 (not too bright) guineas who just find a corner on the ground. Up in the trees is good… in the coop is better. On the ground is not so intelligent.

For daytime we take the risk of letting them run, for the evening we lock them up for safety. This coop does the job.

Pin this to find later! 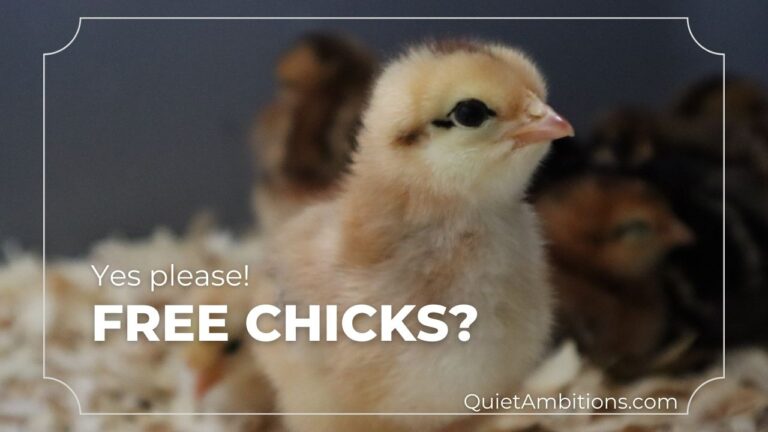 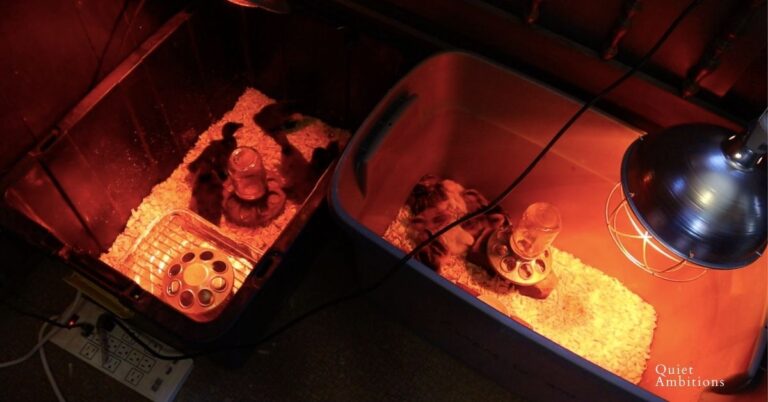